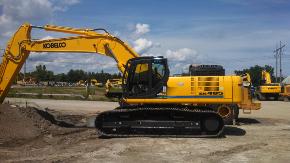 The story of Finke Equipment’s growth from basement repair shop to a company with approximately 30 full-time employees is a lesson in taking calculated risks, working hard and learning from mistakes.

Today it is quite an impressive enterprise but it once had a far lower profile. “We started in 1977 out of the basement of our house, just my father and I,” said company president John Finke. John and his father Bob dove into the business of repairing jack hammers for an area construction company as well as selling Homelite equipment out of the back of a pickup truck.

Finke and Sons built a cement block building in 1985 on the east side of Route 9W at the Bethlehem, Coeymans border. There they continued to repair small engines, small pieces of construction equipment, and deal Homelite products. Soon they purchased some well-used heavy machines to rent to contractors, placing them tentatively in the construction equipment business.

“We bought a couple of used machines and we started in the equipment rental business,” Finke said. In 1988 the Finke’s took the pivotal risk that led to even more substantial, sustained business growth. They built a larger building on the west side of Route 9W, where it’s repair shop and offices are today. That original building has been expanded twice, and the business is bulging at the seams today. Further expansion is expected once again in the near future to better serve their customers.

In spite of the growth, many of the equipment lines that Finke started will remain a core part of its operation. “With most of our lines we’ve tried to maintain stability,” Finke said. “If we changed lines it’s because a manufacturer went out of business. Contractors like stability. They don’t like to see you changing brands. They like to go to the guy they bought it from to purchase their parts.”

In  early 2013 Finke Equipment began a project that we hope will take our company to a whole new level. A sixty-seven thousand square foot, state of the art facility is currently under construction behind our current building. The new facility will have over twenty-five thousand square feet of shop space, including a full fabrication shop, a 20’X60’ paint booth, and indoor wash bay. We’ve even incorporated a fifty person technology room. Moving forward we really want to emphasize efficiency, and customer service more than ever before.